Unraveled (The Gatekeeper Chronicles, Book 2) by Dina M. Given: Giveaway

Emma Hayes, a mercenary turned monster hunter, finds herself the secret savior of Earth as she attempts to battle creatures, called Monere, and keep unsuspecting humans safe. Emma already has blood on her hands, and the tide of Monere keep coming. She quickly learns that not all battles can be won with a gun and she must decide whether to take up Sharur, the magical battle axe, which may trigger a latent and terrifying magical ability within her. Emma’s monster hunting skills also catch the attention of a government operative who enlists her help to discover the identity of another hunter. This investigation leads Emma deep into the heart of a supernatural organized crime Syndicate, and all of her notions about the evil nature of these creatures are called into question when she meets The Syndicate’s leader. Can Emma unravel the true nature of the Monere and come to terms with her own magical ability before the next gateway opens, threatening the future of humankind?

With complete disregard for the danger he was in, the zombie lurched around to face me then attacked. He swung the table leg at me as if he was Babe Ruth. I caught it between the blades of the swords and, with a quick twist, wrenched the club from his hands. It clattered to a stop at the feet of The Blob, who continued to eat his meal, watching the proceedings with only mild interest. I would deal with him later. The swords felt light and comfortable in my hands, thanks to Eddie’s training. It pissed me off to admit he had been right about my gun not being the solution in every situation. I twirled the swords, familiarizing myself with the feel of them. Then the zombie lunged at me again, reaching out with his hands. In two quick slashes, his oily balloon head fell to the ground with a dull thud, and the top half of his body slid from the bottom half where I had cut cleanly through his torso. That might have taken care of the vessel, but the ooze wasn’t affected. It poured forth from his eyes, nose, and mouth, sliding across the floor to join the larger mass that had moved into the center of the restaurant. It seemed to be waiting for a command from The Blob, who had his hand held up, signaling for it to wait. My eyes shifted to the girl who was still in a chair in the far corner by the door. With gritted teeth, sweat beading her forehead, and mascara running in rivulets down her cheeks, she was intent on willing her body to move. Her face was terrified, but the paralytic effects of the poison seemed to be slowly wearing off as her fingers twitched. Turning to The Blob, I said, “Why don’t you call back your mucus monster, and I’ll let you walk away from this in one piece, not like your friend there?” I nodded toward the wet, bloody pieces of the zombie littering the floor. He chuckled deeply. “Why don’t you leave, and I’ll depart peacefully with the girl and my pulmonata?” he said, referring to his gooey offspring. “The way I see it, I have the distinct advantage here. Your flimsy swords cannot harm my child.” Yuck. He just referred to that giant ball of snot as his child. “What do you want with the girl?” “There are plenty of desperate Monere out there who aren’t as fortunate as I am to have a human-like form. Some need a human to wear so they may come out of hiding and live a normal life. Others just need to eat or mate,” he said, eyeing me from head to toe. I shuddered, knowing he was picturing me naked. “My job is to supply them with what they need.” Bile rose in my throat at the thought of what could have happened to that poor woman. How many other humans had already suffered the same fate? And here I was, practically playing games with these creatures, refusing to take up the most powerful weapon I had against them because of my own fear. How many had died or been sold into slavery already because of my own cowardice? Enraged, I spun my dual swords and lunged toward the smug bastard. Fear flashed across his face, but he was too big and lumbering to even attempt an escape. Instead, he spat mucus globs at me, one after the other. My spinning swords sliced them to ribbons before they could touch me, splatters of goo flying across the restaurant and landing on almost every exposed surface. By the time I reached him and split him open, chest to pelvis, spilling his innards onto the floor between his feet, he had let loose almost a dozen zombie-making children. Pausing to catch my breath, I heard the woman by the door scream, “Behind you!” I spun around to see every last droplet of ooze moving down the walls and along floors. If that stuff escaped the restaurant, it could infect hundreds of humans. Given the disgusting filth that already stuck to public streets and sidewalks in the city, green ooze would just be more globs stuck to the bottom of shoes and carried home to infect entire families. 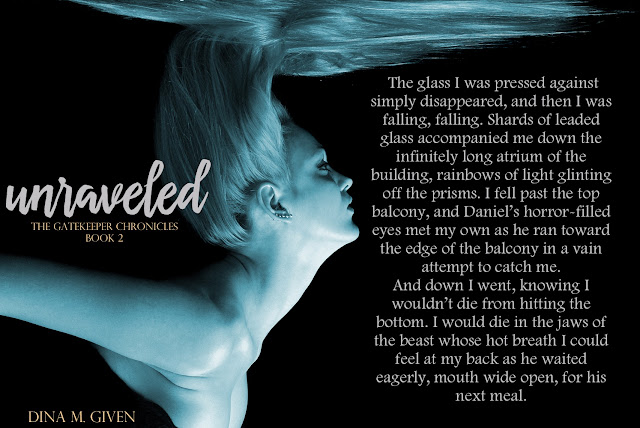 It’s not always easy to differentiate between the good guys and the bad guys, especially when your heroine is a trained killer and she may be falling in love with her evil hunter… Emma Hayes, a former military Special Forces Operative turned mercenary-for-hire, finds her tightly controlled world turned upside down when she is attacked by horrible monsters. Emma must use every skill in her arsenal to stay alive as she tries to solve the mystery of why she has been targeted. Her list of enemies keeps growing - from Zane Shayde, an evil Mage, to a secret branch of the US government - and she doesn't know if there is anyone left she can trust. To complicate matters further, Emma is inexplicably drawn to Zane in a way she doesn’t quite understand, even knowing her life is forfeit if captured. Who is he and why does he have this affect on her? How can she fight a being that calls to her, body and soul? Emma is left haunted by questions, doubts and fears as to why she has been targeted, when they will come for her next, and how she will possibly be able to survive against an enemy she doesn't understand.

Dina Given lives in rural New Jersey – home of farms, horses and the largest hot air balloon festival in North America – with her husband, two crazy kids, and one rescue dog. She is an exercise enthusiast and avid lover of food and wine (hence the need to exercise). Dina also works full time for one of the largest healthcare companies in the world. She attributes her ability to juggle family, work and writing to her obsessive, hyper-focused, Type A personality.

Email ThisBlogThis!Share to TwitterShare to FacebookShare to Pinterest
Labels: Between The Sheets, Dina M. Given, Excerpt, Giveaway, Tour, Urban Fantasy