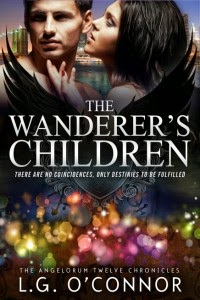 “O’Connor tackles important world building, while also kicking off the story with a bang.”  - Publisher’s Weekly (Trinity Stones)
A thrilling follow-up to debut novel, Trinity Stones, The Wanderer’s Children continues the story taking us deeper into the depth of destiny and the impact of our free will on the forces that sway our fate, and the most powerful force of all—love.
The Wanderer’s mission three decades ago: secretly sire children to hide his bloodline, and protect them until their destinies can unite in the final battle between good and evil. That time has come…
Cara Collins, the First of the Holy Twelve, longs for one last peaceful weekend with her bridesmaids as she plans her wedding to Simon Young, her former Trinity Guardian, before duty calls with the Angelorum to gather the Twelve and prepare them for battle. Life, as she knew it, has changed; weird is Cara’s new normal. Her newly acquired Nephilim DNA is wreaking havoc on her and those closest to her as her body transforms into Amazonian proportions and an overabundance of pheromones threatens to land her in hot water with Simon—not to mention a sudden suspicious outbreak of “insta-love” among her friends.
Michael Swift, Cara’s Trinity Messenger, has spent months running from his attraction to Cara’s brazen best friend Sienna, the only woman who has ever skirted his considerable defenses. But if he wants a future with her, he must confront his tormented past head on, or risk losing her and destroying the future of the Angelorum.
As dark forces and outside threats gather, Cara has more to worry about than fitting into her wedding dress and playing Cupid to her friends. A second encounter with rocker Brett King shows Cara once again that there are no coincidences. One of the Wanderer’s children, Brett and his secret siblings are the key to gathering the rest of the Twelve.
When the newly forming team finally comes together, an unexpected revelation shakes them to their core. They must all look deeper into their souls as new secrets come to light to discover what’s really at stake in the final battle between good and evil…if betrayal and Lucifer don’t rip them apart first.
. 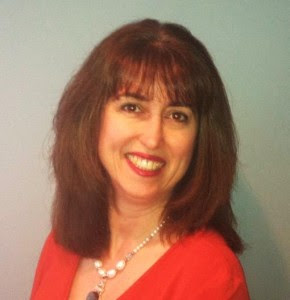 L.G. O’Connor is a member of the Romance Writers of America. A corporate strategy and marketing executive for a Fortune 250 company, she writes adult urban fantasy, paranormal romance, and contemporary romance. She is currently working on the third book in the Angelorum Twelve Chronicles, Book of Four Rings, for publication in 2015. In addition, she is writing an adult contemporary romance series. L.G. lives a life of adventure, navigating her way through dog toys and soccer balls and loaning herself out for the occasional decorating project. When she’s feeling particularly brave, she enters the kitchen . . .
.

What is your favorite part of The Angelorum Twelve Chronicles?

That’s a great question, and I’m sure it can be answered in a bunch of ways. The first book in the series, Trinity Stones, was my debut novel. The story was near and dear to my heart. When I started writing, in my mind, I would’ve been satisfied if Trinity Stones was the only book I’d ever written. But I’m a huge series reader, and once I find a set of characters I like, I want to hang out in their world for a while. One book isn’t enough for me as a reader or a writer.

I love my characters, and I think they are my favorite part of this series for me. They’re all flawed, smart, and interesting—at least to me. Not to mention, they’ve been sharing space in my head since late 2009, I’ll be sad to let them go when the series completes with Book 4 in 2016.

How long did it take you to write The Wanderer’s Children?

While Penguin had an early draft of Trinity Stones during the first quarter of 2013, I picked up the draft of Wanderer’s that I’d started in the spring of 2012. I worked on it for the next 5 months with a developmental editor. When Penguin passed on Trinity, I put down Wanderer’s and did a major rewrite that summer and signed with She Writes Press for an April 2014 launch date. After Trinity was well into production by October 2013, I decided to do NaNaWriMo and ended up writing another book in a different genre from start to finish in eight weeks. By the time I picked up Wanderer’s again in preparation for the December 2014 launch, it was June 2014. I had the summer to complete, revise, and get the manuscript “production ready.” So, if I squeeze out all the time in between, it took me about 6 months to write Wanderer’s and another 3 months to revise it.

If you could be best friends with one of your characters, who would it be?

Since Cara’s best friend Sienna is loosely based on my best friend, I guess I’d pick Sienna in all her foul-mouthed glory J

What books have most influenced your life?

There are two, both of which I use as part of a first date conversation between Cara and Simon in Trinity Stones. Ironically, I read them both during my senior year of high school. The first was The Little Prince by Antoine de Saint-Exupéry, which I read as part of my senior year French class. The second was Siddhartha by Hermann Hesse. Both offered profound life lessons.

Can you share a little of your current work with us?

You could say that I have a few things going on right now. *smiles* I’m finishing the prequel novella to Trinity Stones, Hope’s Prelude which is due in early 2015. But that’s not all…

Remember that 2013 NaNoWriMo novel I mentioned above? I signed with an agent in November for that book, rather than going direct to publishers like I did with The Angelorum Twelve Chronicles. For 2014 NaNoWriMo, I started the sequel to the 2013 NaNo book, and hope to have that completed after I finish Hope’s Prelude and before I pick up my draft of Book of Four Rings due at the end of 2015.

What book are you reading now?

OMG! I’m obsessed with Diana Gabaldon’s Outlander series. I ignored those books for years since I just wasn’t reading that genre. And then the STARZ series came out… I dinna ken what’s come over me. Could it be Jamie Fraser? Whatever it is, I’ve read the first four books since September. Those are some hefty tomes, let me tell you. That said, anything to spend more time with Claire & Jamie. I’m looking forward to April 4th and the mid-season return.

Do you have anything specific that you want to say to your readers?

I want to say “Thank you!” for entering the world of the Angelorum. If I’ve entertained you and made you think, then I’ve done my job as an author. I’m grateful for your time, and that you chose to spend it with me.

a Rafflecopter giveaway
Posted by Diane Lynch at 12:30 AM